Do you love Cajun and Creole cuisine? If so, then this blackened chicken recipe is for you!

It's a spicy dish that combines Cajun seasoning with the traditional flavors of Louisiana. The finished product features a crisp crust on the outside of each piece while remaining moist on the inside. You can serve it as an entrée or use it in other dishes like pasta, sandwiches, or tacos.

What is blackened chicken?

Blackened chicken is a dish made by seasoning the meat with spices, and cooking it in hot oil. Typically, you will coat your protein of choice with blackening spice before frying it up. The spiciness comes from cayenne pepper or chili powder that has been blended to create this unique flavor profile.

There are many variations on how to make this dish which makes for some interesting experimentation opportunities! You can add different oils or seasonings depending on what style you're going for: Creole (spicy), Caribbean (zesty) or New Orleans-style étouffée (sweet). It's always best when cooked outdoors over an open flame such as gas grill or charcoal grill - perfect for summer time grilling fun!

The most important thing to remember about blackened chicken is that the spices are key, and you'll want to be careful not to over-handle your meat. The oil should just give it a light coating. This ensures that the heat can penetrate all of the way through so each bite has a perfect amount of spice throughout with no dry or rubbery parts!

Blackening chicken is one of the most popular dishes in Louisiana, with many variations and styles that are all delicious! Cooking this dish over an open flame makes for a great summer time cooking experience for a weeknight meal: get out your grill or firepit to cook these up anytime you're looking for some quick food on the go. Our easy recipe will give you perfect results every single time!

What is blackened chicken seasoning?

Blackened chicken seasoning is a spice mixture used to impart the distinctive flavor of Cajun cuisine. It can be purchased pre-made or made at home; it typically contains:

Pre-made blackening seasoning can be purchased in grocery stores or online from retailers like Amazon.com or Williams-Sonoma who offer different kinds of spice blends to suit individual tastes as well as recipes that use their particular brand's blend. It is also possible to make your own at home: combine paprika, garlic powder, onion powder and salt together in a small bowl.

This is how I make my favorite version of Blackened Chicken. Store leftovers in the refrigerator in an airtight container.

List of side dishes that go well with blackened chicken

The mashed potatoes are a creamy and comforting side that goes well with blackened chicken. The green beans, corn on the cob, peanut butter and honey sandwiches provide variety in terms of texture as well as flavor.

The green beans have a crispy exterior but soft interior making them great for dipping into sauces like barbecue sauce or ranch dressing! They also make excellent oven roasted veggies because they soften while cooking without drying out much at all! Use fresh chopped garlic to give your dish an extra punch of flavor!

Corn on the Cob

There is nothing better than having a juicy, sweet ear of corn on the cob during the summer months. The best way to cook them is by directly grilling or boiling in water with butter and salt until fully cooked!

I like dipping my peanut butter and honey sandwich into vanilla ice cream because it makes me feel all warm and fuzzy inside! Add some chocolate syrup for an extra treat that you will not regret trying at least once in your lifetime!

Place an oven rack in the middle position and heat oven to 400°F (200°C). In a small bowl mix together olive oil and coriander seeds until well combined. Brush both sides of skinless boneless breasts evenly with the mixture then place them seam side down onto a lightly greased baking sheet. Bake for 15 minutes turning once halfway through cooking.

In a small bowl mix together olive oil, lemon juice and thyme until well combined. Brush both sides of skinless boneless breasts evenly with the mixture then place them seam side down onto a lightly greased baking sheet. Bake for 15 minutes turning once halfway through cooking.

In a small bowl mix together olive oil, white wine and rosemary until well combined. Brush both sides of skinless boneless breasts evenly with the mixture then place them seam side down onto a lightly greased baking sheet. Bake for 15 minutes turning once halfway through cooking.

Place an oven rack in the middle position and heat oven to 400°F (200°C). In a small bowl mix together butter and cayenne pepper until well combined. Grease one side of each slice of bread with some of the butter/pepper mixture then top one buttered side of two slices with thin sliced fennel. Place a skinless, boneless breast on top of the fennel then cover with remaining bread slices (buttered side down). Secure sandwiches together by placing toothpicks in through all layers at either end for easy handling during cooking. Bake for 15 minutes turning once halfway through cooking.

Place an oven rack in the middle position and heat oven to 400°F (200°C). In a small bowl mix together olive oil and coriander seeds until well combined. Brush both sides of skinless boneless breasts evenly with the mixture then place them seam side down onto a lightly greased baking sheet. Bake for 15 minutes turning once halfway through cooking.

Place an oven rack in the middle position and heat oven to 400°F (200°C). In a small bowl mix together mustard and cayenne pepper or chipotle pepper until well combined. Grease one side of each slice of bread with some of the mustard/pepper mixture then top one side with mayo or salad dressing. Place any other desired toppings on both pieces of bread before adding chicken fillet. Cover with remaining piece(s) of bread.

To make dressing: in a small bowl stir together mayonnaise or salad dressing with lemon juice until well combined. Pour over the chicken mixture and toss to coat before serving chilled on lettuce leaves topped with croutons if desired. A low carb delight and one of those healthy recipes!

Wash your chicken with cold water, pat dry with a paper towel.

Open up some of the slits on both sides of the chicken breast to allow for more flavor penetration.

Rub the blackening seasoning evenly onto all sides of your chicken and place it on a preheated grill covered with cooking spray or olive oil for approximately 12 minutes per side or until no longer pink in the middle (internal temp should be around 165-170 degrees F).

You can also wrap in aluminum foil before grilling but this will reduce the amount of charring on the meat.

Serve immediately over rice with vegetables.

Frying then baking the chicken

Preheat the oven to 400 degrees Fahrenheit.

Put a cast iron skillet in the oven and roast it for about 15 minutes, until heated through. (You can also preheat an electric griddle.)

Heat olive oil in another large pan over medium heat. When there are bubbles around the edge of the pan, add chicken skin side down and cook without touching until crisp on one side, then flip and do same with other side. Remove from heat when browned all over but not blackened; this should take less than five minutes per piece of meat depending on size of pieces--you want them to be crispy rather than completely cooked through at this stage so they finish cooking later while resting out of direct sunlight if you can.

Transfer chicken to the hot cast iron skillet in oven and roast until cooked through, about five minutes more or 20 minutes total cooking time for a whole bird. If you're using smaller pieces of meat (half breasts, thighs), then figure on three to four minutes per side plus 12-15 minutes roasting time depending on size/thickness of your cutlets--cooking this way will give you that crispy skin without overcooking the interior.

If not serving immediately, let rest before carving so juices are reabsorbed into the flesh rather than running out when carved; cover loosely with foil if necessary to keep warm while resting.

Carefully remove from pan by sliding spatula under each piece and transfer to a cutting board. Tent with foil and let rest for about 20 minutes before serving to allow juices from the meat's exterior time to redistribute throughout its interior, which results in more juicy slices of chicken

Season the chicken with salt and pepper. In a heavy skillet, heat oil over high heat until it is smoking hot. Add the seasoned chicken in batches to allow space for browning without crowding pan (about four pieces per batch). Cook uncovered about six minutes on each side or until cooked through. Drain on paper towels before serving if desired.

Pour off all but one tablespoon of fat from pan; reduce heat to medium-high and add garlic cloves, chopped onions, green peppers and celery sticks to remain in contact with bottom of frypan while stirring occasionally for eight minutes or just long enough vegetables are slightly softened but not browned--they should maintain their color as well as firm texture rather than turning limp when stirred too often.

Add the chicken back to pan, then add tomatoes with chopped green chilies and cumin; stir well until thoroughly combined--about two minutes. Reduce heat again to low-medium so that mixture simmers for about fifteen minutes or just long enough vegetables have softened but not disintegrated in sauce while stirring occasionally. Add black pepper flakes at this time if desired. Serve hot over rice or pasta as a main dish with salad on side or as is when served warm as an appetizer entrée before a meal of soup and sandwich combination platter.

Serving and eating it!

This is a dish that's good for any occasion, which I like because it means I can make this recipe anytime. You don't need to go out of your way to buy anything fancy and if you have some time, then put on some music and get cooking!

The best part about this delicious chicken recipe? It tastes great even when cold! So if you're looking for something quick or easy (or both) - give this one a try. 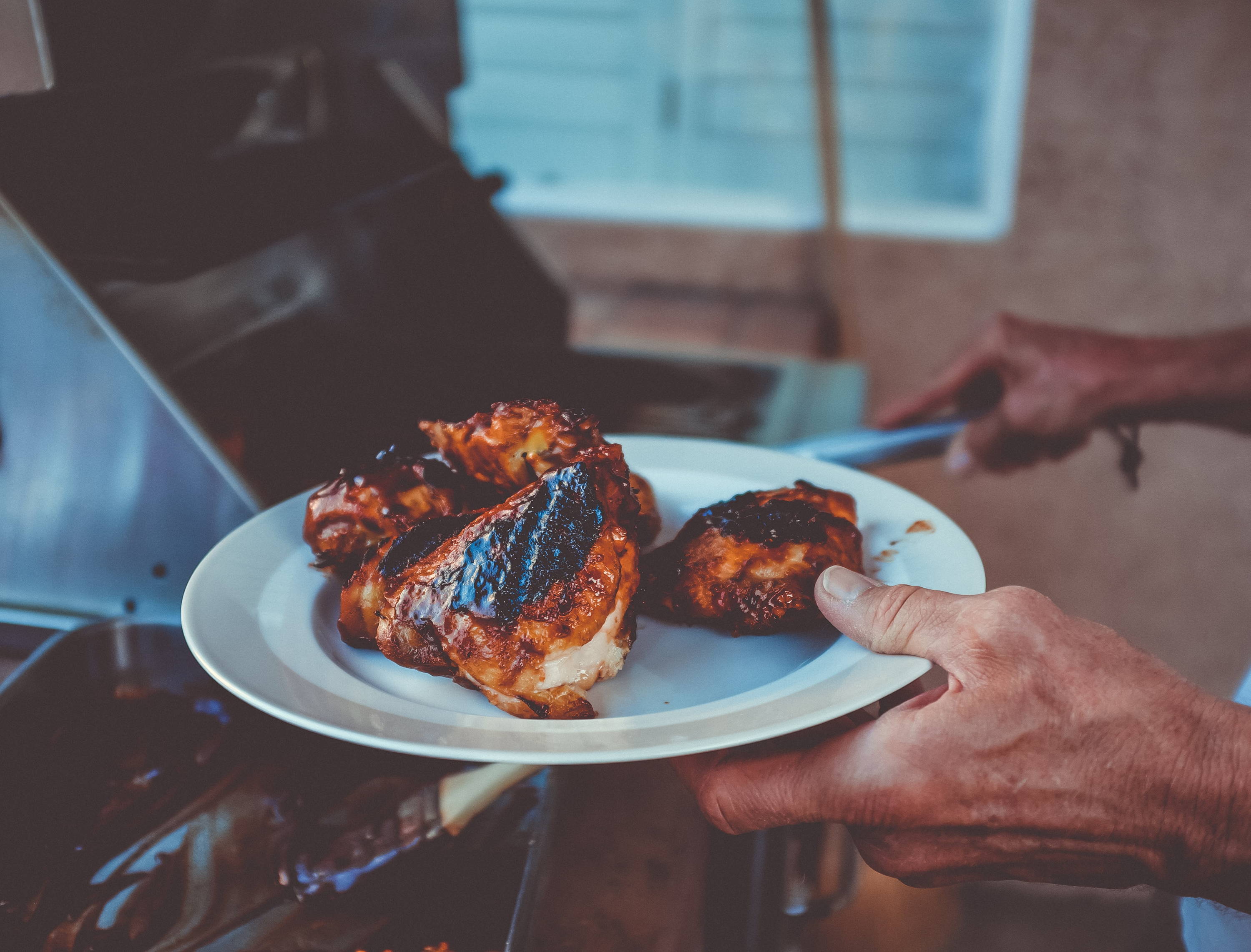 Hope you enjoyed this article about blackened chicken!

Looking for more on Blackened Chicken and other similar content? Try these: