The Amazing Flavors of Churrasco 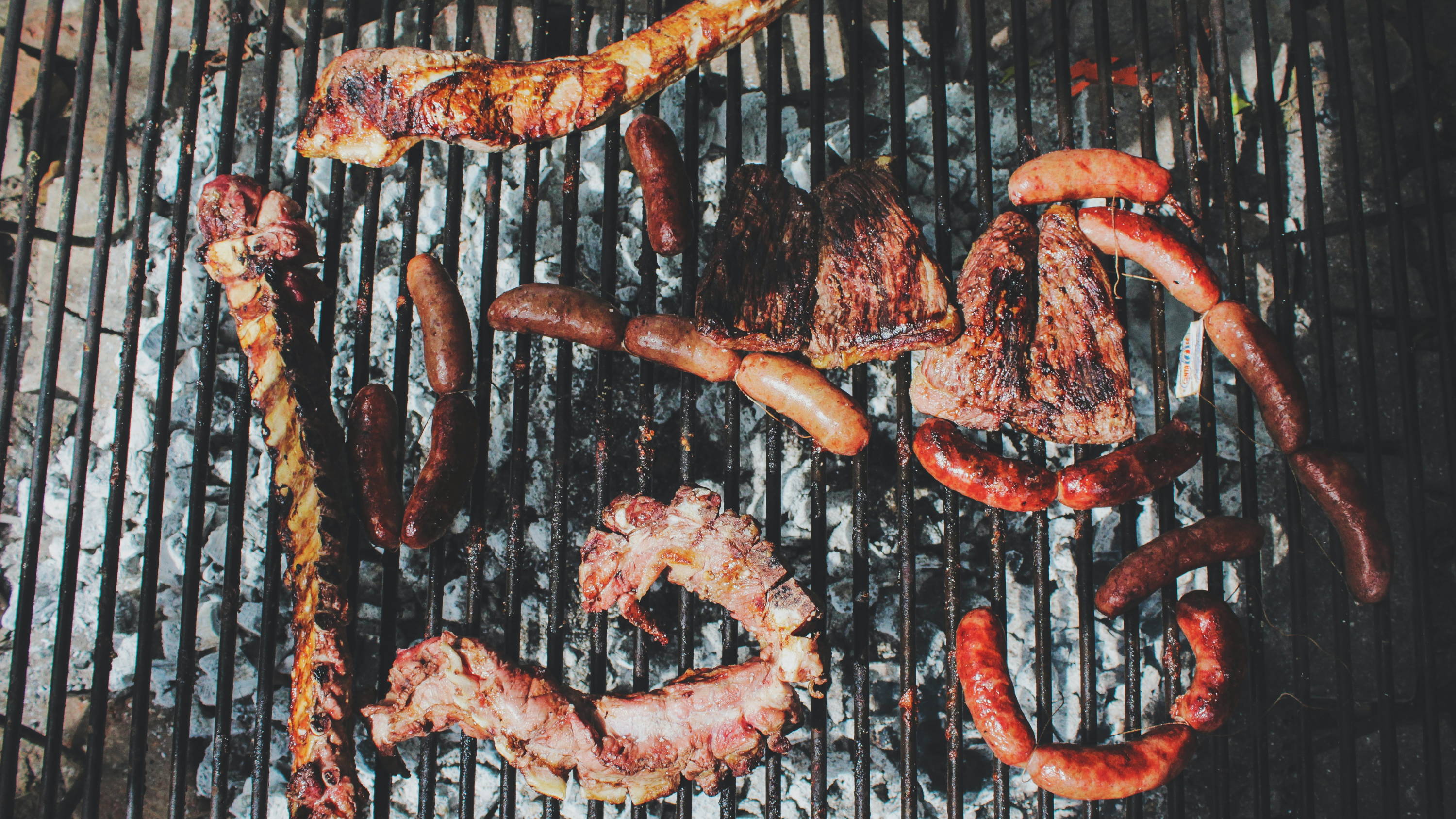 Churrasco is a Brazilian dish that has been around for centuries. It consists of grilled meats, which can include grilled steak (especially skirt steak, flank steak, top sirloin, or filet mignon), pork, chicken and sausage. The word "churrasco" actually means to grill or barbecue. There are many different ways to enjoy churrasco depending on the region where it originated from in Brazil - so you never have to get bored with this delicious meal!

This dish has made its way to the U.S., and is being enjoyed by chefs in restaurants all over our country! Churrasco can be found at a Churrasco Brazilian Steakhouse. It's time for us Americans to give this delicious meal a try - we are sure that you will love it as much as Brazilians do!

Watch this video on churrasco

Churrasco is a traditional Brazilian barbecue that's become popular across South America and the world. Different cultures have their own versions of this grilled meat, and the history behind it varies from culture to culture as well. Churrasco originated in Brazil where it was an everyday meal for most Brazilians until 1950s when beef became more expensive so they began eating chicken instead. The food has grown in popularity over time and now you can find churrascarias all around the world with different cultural influences on how this cuisine evolves.

In Brazil, especially in southern Brazil states like Rio Grande do Sul, churrasco is a very popular dish. It's usually a variety of meats (and the cut of beef is typically large pieces) cooked by gaucho chefs on a churrasco grill over an open fire and served with side dishes such as white rice beans and fried bananas or boiled manioc root. The meat can be marinated in different ways: garlic, kosher salt, pepper; wine vinegar; soy sauce; cumin; olive oil. As it cooks the wood smoke prevents the barbecue from drying out the meat by sealing in moisture which gives it that characteristic flavor of grilling over charcoal rather than gas-grilled.

The origins of this cooking method are not clear but there are many theories behind how they began to cook beef like this back then when food was scarce due to cattle rustling and people being forced into slavery during colonial times for example.

Beyond Brazil, churrasco has been adopted by many cultures and countries like Argentina, United States of America and Portugal. As the dish is adapted to its new environment it can take on a different meaning in other areas.

In Argentina for example, the country that claims this as their own invention; they have turned what was originally just beef into an entire meal served with salads, french fries or rice (Scotland). In US you will find them made out of pork ribs instead since pigs were more common back then when they first started cooking meat like this (Puerto Rico) while in Portugal they serve it with roasted vegetables which replaces one side dish called farinha de mandioca which would've traditionally accompanied this type of meat.

How to prepare it

Churrasco is a popular Brazilian dish that originated in the Southern region of Brazil. It is traditionally cooked on an open flame, which gives it its distinct flavor. Beef and pork are great options for churrasco because they have so much fat content, but you can also add chicken or lamb to beef and pork mixtures for more variety.

To prepare this amazing dish at home: take a medium-sized pot with high sides and fill it up about halfway with water; place over medium heat until boiling; turn off the stovetop burner under the pot; then toss in your cut of meat (beef, lamb, etc.). There should be enough liquid left from cooking these meats to keep them moist while grilling. Alternatively, you can use a crock pot. Fill with water halfway up the sides of your meat cubes and cook on low for six hours or more; then place over open flame grill to finish cooking.

After about 30 minutes after grilling, turn off one side of the open flame and let it cool down slightly before removing from heat so that it does not overcook. You will know when they are done by their golden brown coloration (which comes from fat content) as well as the juices running out clear instead of red-tinged. Once removed form fire, cut into individual pieces with sharp knife while still hot and serve immediately! Not only is this dish delicious but also very easy to prepare!

* One green pepper, sliced into strips

* Three tomatoes, chopped. You can also use canned if you don't have a tomato on hand!

- Add spices such as cumin or turmeric according to your preference. If using fresh herbs add them when cooking the vegetables before adding meat chunks. Parsley is a great option!

** Cut up all ingredients in appropriate sizes **** Place peppers and onion pieces over open flame grill until they're browned but not charred; remove from fire immediately after. * Slice meat against the grain into long thin strips and place on a large platter. Add salt, pepper, lime juice, Worcestershire sauce to taste; cover with shredded lettuce or other greens of your choice plus tomatoes and onion slices if desired.

Season the meat before cooking it with salt, garlic powder and pepper.

Sear both sides of each steak in a hot pan for about five minutes per side or until they are cooked to your liking. Then place them all on a sheet tray and put in an oven preheated to 500 degrees Fahrenheit for three to four minutes until you have nice grill marks up top. Take out from the oven, slice into strips against the grain (makes 'em easier to chew) and serve alongside some chimichurri sauce or salsa criolla as dipping sauces!

For those who don't like beef: use any other meat instead! Just season them up just like you would the steaks mentioned above then cook over indirect heat for about an hour and a half.

- Put the meat in skewers to make it easier to manage - use chicken, beef, shrimp or vegetables if you don't like traditional churrasco meats.

BONUS: If you want some more veggies with your meal then grill up some broccoli or zucchini using the same method that is mentioned above!

A few tips for enjoying your meal

In Brazil, churrasco is served with a variety of sides and sauces. You can try it with rice or other grains such as farofa (toasted manioc root flour) or macaxeira cozida (boiled cassava). Also common are fried bananas, mashed avocado, chimichuri sauce (an herb sauce from Argentina), mayonnaise mixed with ketchup to make tangy tomato salad dressing called molho de pimentão rojo.

When you’re enjoying your meal at home don't forget the side dishes! A few favorites include borrachudos which are boiled green beans in garlic oil; pastel de carne made up of ground beef cooked together with rice, olives and raisins; molho de pimentão vermelho made of ground beef cooked together with tomatoes and red onions; Brazilian style turkey rolls.

Finally, don't forget the wine! Churrasco is a perfect opportunity to open up your favorite bottle of red.

Where to find it in Dallas, TX

Tico's Tex Mex BBQ: Fans of Brazilian food will enjoy the grilled meats including pork ribs, sausage and chicken hearts. They also offer a variety of side dishes such as fried bananas or rice with black beans;

Bolsa Mercado: Located in Dallas’ Design District, this is an all day dining restaurant that offers a wide variety of dishes including grilled meats, salads and sandwiches.

Mozzarella Company: Located in Uptown Dallas you can enjoy all the flavors of Italy at this restaurant which offers an assortment of pasta recipes as well as house made pizzas with many types of toppings to choose from

Other places in the United States where you can enjoy this amazing dish!

Types of dishes you can enjoy with churrasco

The following are other dishes that can be enjoyed at a churrascaria restaurant besides the traditional meat buffet and salad bar options. Some of these may not actually have been invented in Brazil but nevertheless do seem to be authentic Brazilian dishes.

- Mousse de chocolate : this is a dessert that has been around in many parts of the world for some time but is now also quite popular in Brazil

Hope you enjoyed this article about churrasco!

Looking for more on Churrasco and other similar content? Try these: