Radicchio: What is it? How to cook and eat? 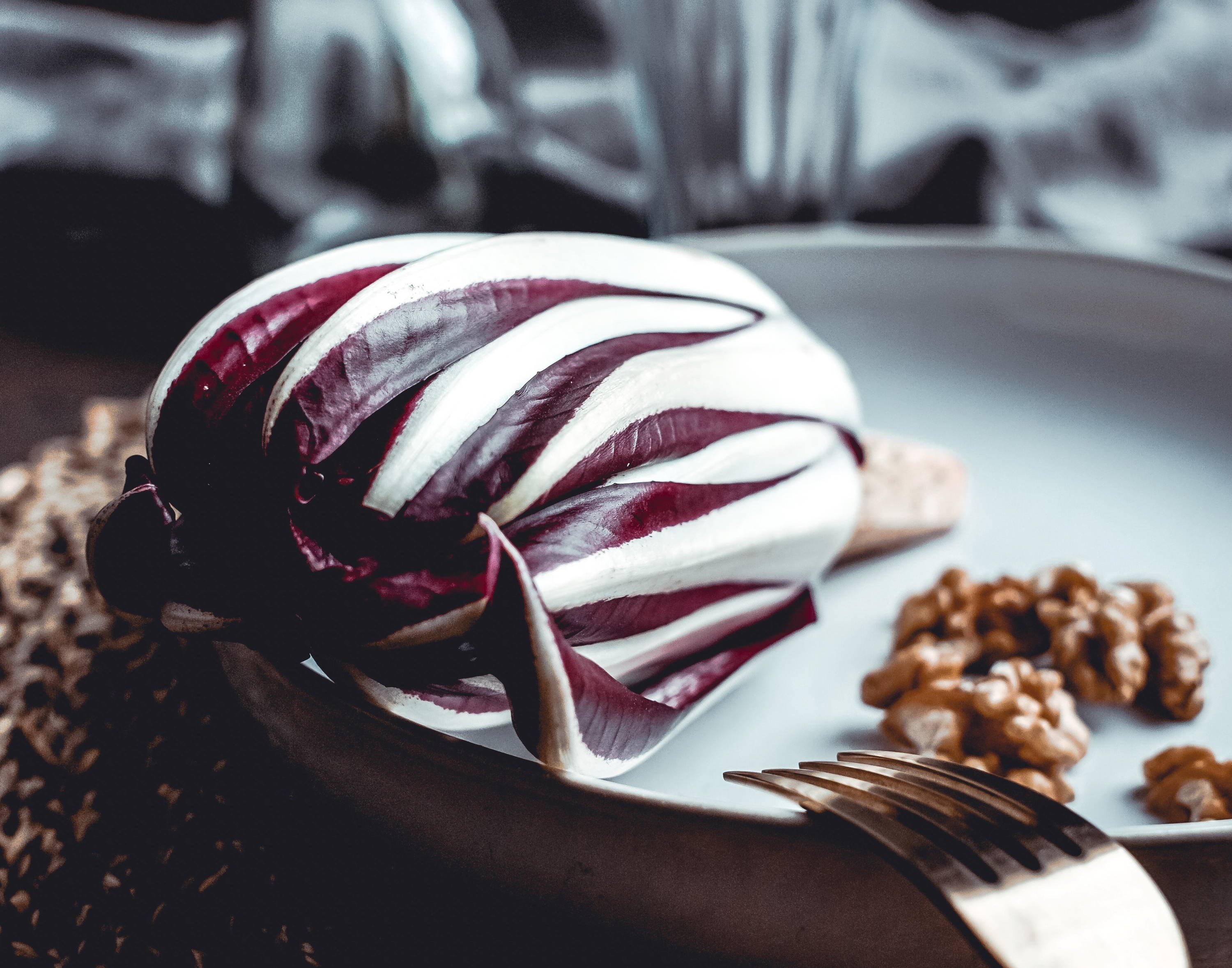 Radicchio is a type of chicory, and it is in the same family as Belgian endive. It has a crisp texture with a bitter taste. Radicchio can be eaten raw, but it's usually cooked to soften its bitterness. You can also use radicchio in salads or sandwiches for an added crunch!

Watch this video on radicchio

What is radicchio and where does it come from?

Fresh radicchio is a green, crunchy vegetable with white veins (or white ribs) that gives it its distinctive appearance. It’s also known as Italian chicory (cichorium intybus to be precise) or red lettuce and originates from Italy, but is enjoyed throughout the United States. Radicchio has many health benefits including vitamins C and K which help boost our immune system to fight off colds and viruses. There are many different radicchio varieties (including pink radicchio and treviso tardivo) due to plant breeders and it is part of the asteracea family (related to endive).

How to cook and eat radicchio

Radicchio is best eaten raw with a light, vinaigrette based dressing.

To make the salad more filling combine it with red or orange bell peppers for sweetness and avocados for creaminess.

You can also grill radicchio over medium heat in olive oil and lemon juice until its soft but still crunchy. Drizzle on some balsamic vinegar after cooking for sweet flavor that balances nicely with the bitterness of the leafs.

Mix grilled radicchio into salads by adding spinach leaves which will provide you with additional Vitamin A and Vitamin K - as well as other minerals such as calcium, phosphorus, potassium and iron.

Radish can be served alongside your favorite pasta dish! Buy fresh egg noodles from your local grocery store or homemade and cook to al dente. Toss the noodles in a pan with olive oil, garlic, salt and pepper for flavor.

Add radicchio leaves to your pasta dish just before serving as it will wilt quickly if cooked ahead of time.

Radicchio can also be eaten raw by adding slices into salad greens like lettuce and spinach.

Recipes for cooking with radicchio

Radicchio and Blue Cheese Salad: Chop a head of radicchio into bite sized pieces, mix with crumbles of your favorite blue cheese in a large bowl. Toss in some sliced almonds if you like them too. Drizzle dressing over the top as desired before serving for an easy bed to make any sandwich more delicious!

Grilled Vegetable Ratatouille: This classic French vegetable dish is great way to use up all those summer vegetables that are hanging around on our plates at the end of the season. Slice two or three heads of radicchio (cut off their bottoms so they can stand) into ½ inch strips and place cut side down in a roasting pan lined with aluminum foil. Cover with thinly sliced zucchini, eggplant and summer squash. Drizzle with olive oil, salt and chopped fresh rosemary before roasting at 400 degrees for about 45 minutes or until vegetables are tender.

Radicchio Pizza: Slice radicchio in ½ inch strips to put on top of your favorite pizza dough as a new take on the old red sauce routine! Add some pine nuts if you like them too. This is excellent topped with goat cheese or mozzarella as well!

The health benefits are endless- so you should try this vegetable out right away! The crunchiness is addicting once you start eating it but don't worry because there's no guilt when eating some radish leafs on the side of your favorite meal. There are many ways that you can prepare them -from grilling to mixing salads together; whichever way you decide to enjoy this vegetable, we're sure that radicchio will be a new favorite in your culinary repertoire.

Tips for growing your own radicchio at home

Plant in early spring or fall. Radicchio prefers cool weather and will not grow well if planted outside during the hot summer months.

Keep soil moist, but do not overwater. We recommend using a soaker hose if desired to avoid over watering--or wait until evening when it is cooler out for your plants' roots to dry up some before giving them water again.

A little tip: If you are harvesting all of your radishes at once (rather than leaving some in the ground), consider planting a few extra rows as "refugees" that can take advantage of any missed holes left behind by harvested radishes. This way, there will be plenty of fresh food for late season harvest even after all your original rows have been harvested.

Harvest radishes as soon they are big enough to eat, by twisting them out of the ground with a firm tug (if you're planting from seed). If you've planted in trenches or raised beds and want to wait longer before harvesting for bigger roots, then feel free! Remember that larger roots can be stored in the refrigerator or root cellar until it is time to harvest--or use immediately if desired.

A little tip: Radicchio will grow well alongside most other vegetables so don't hesitate to try growing some alliums like scallions, garlic chives, and flowering onions nearby on either side of the row for an extra boost of flavor. This way when their season is over, you still have a crop of vegetables to harvest.

Radicchio is ready to go in the ground when it's about 12 inches high (if planting from seed) or has been transplanted and grown for three weeks. This will be around mid-May in most locations.

A little tip: If your radish crops are not producing as well as expected this year, consider trying some new varieties like Early Scarlet Globe that produce smaller roots with more thin skin which might fit better into your culinary plans! But if you prefer larger roots then look for later season varieties that can grow up to two feet long--a good example would be East European Red Grano variety.

Is Radicchio a lettuce or cabbage?

Radicchio is a type of lettuce. It's also known as Italian chicory, and can be eaten raw or cooked.

The traditional variety of radicchio is a leafy vegetable with a tart flavor and crunchy texture. When cooked, it has an earthiness to the taste that complements other dishes well. The color of radicchio changes from medium green leaves when raw to deep burgundy red leaves or purple leaves when cooked. It can be eaten in salads, soups, roasted over vegetables as a side dish, or as a pizza topping among many other ways!

It has an earthy taste with hints of sweet spice, but is perceived by some to have a mild bitter flavor. When grown in colder climates (like Canada), the leaves will turn red-purple due to frost exposure which adds both flavor and color to the vegetable. The mild bitter radicchio complements many dishes nicely, including a radicchio salad!

What is radicchio good for?

Radicchio is a leafy vegetable in the chicory family. The leaves are red and have a slightly bitter taste. Radicchio is used as salad, cooked or raw, and can be eaten on its own or with other vegetables such as radishes and carrots. It pairs well with balsamic vinegar, olive oil, salt, pepper, cheese (e.g., Parmesan), nuts (e.g., walnuts) and pine nuts).

It's often said that eating radicchio helps one to feel full because it has more fiber than many green salads do; however there does not seem to be any scientific evidence for this claim.

Radicchio has many health benefits. It is a good source of vitamin A, B vitamins and C (among other things), as well as an excellent source of dietary fiber, calcium and iron.

However, radicchio should be eaten sparingly due to its high content in oxalates which can cause kidney stones if consumed excessively [Source: PubMed Central].

- Eating radicchio may help one feel full because it has more fiber than green salads do However there does not seem to be any scientific evidence for this claim - Radicchios have numerous health benefits such as being a good source of vitamin A,B vitamins and C

- Radicchio should be eaten sparingly due to its high content in oxalates which can cause kidney stones.

It is best consumed raw or lightly cooked without too much oil. It pairs well with other vegetables (e.g., radishes) and nuts (e.g., walnuts). Cooking it for longer periods will make the leaves less crunchy but more tender; however this may result in loss of flavor [Source: Wikipedia]. The leaves are used both in salads and soups because they do not wilt when heated like spinach does [Source: Oxford Living Dictionaries] .

When cooking radicchio use olive oil with salt and pepper or balsamic vinegar.

Radicchio can be eaten on its own but it is often used in a salad with other vegetables such as radishes, carrots, walnuts and cheese. Some simple recipes are:

+ Radicchio should not cooked for too long because the leaves will lose their flavor + Cooking radicchio with olive oil makes them less crunchy but more tender; however this may result in loss of flavor - If cooking radicchios use only small amounts of oil to avoid making the leaves oily-tasting - When preparing salads add some nuts (e.g., walnut), cheese (e.g., Parmesan) or pine nuts which taste good when paired with radicchio

- Radicchios can be eaten on its own but it is often used in a salad with other vegetables such as radishes, carrots, walnuts and cheese.

How do you use radicchio?

- Radicchio can be eaten raw, which is typical in salads. But it also tastes great when roasted with garlic and olive oil or grilled on a panini press.

How to store radicchio?

Store radicchio with the stem end down in a plastic bag or wrapped loosely in paper towels. It should be stored away from fruits such as apples and pears which produce ethylene gas that can cause the leaves to prematurely wither, turn brownish-red and become acidic.

- Radicchios should not be exposed to any fruit (e.g., apple) that tends to produce Ethylene gas because this causes them to prematurely wilt, turn red/brownish-red and become more acidic

What is the nutritional profile of radicchio?

Radicles are rich in Vitamin A, B Vitamins (e.g., folate), C, as well as dietary fiber It also contains calcium and iron; but it should be eaten sparingly because its high content in oxalates can cause kidney stones if consumed excessively. The leaves of a radicle have been shown to contain polyphenols which give it that bitter taste. Radicchios pair best with walnuts, cheese like parmesan or pine nuts when added to salads. They're often used both for raw salads or soups since they do not wilt easily like spinach does.

Hope you enjoyed this article about radicchio!

Looking for more on Radicchio and other similar content? Try these:

The Philodendron Rio: A Houseplant for All Levels