Umeboshi: What Is It and How to Make? 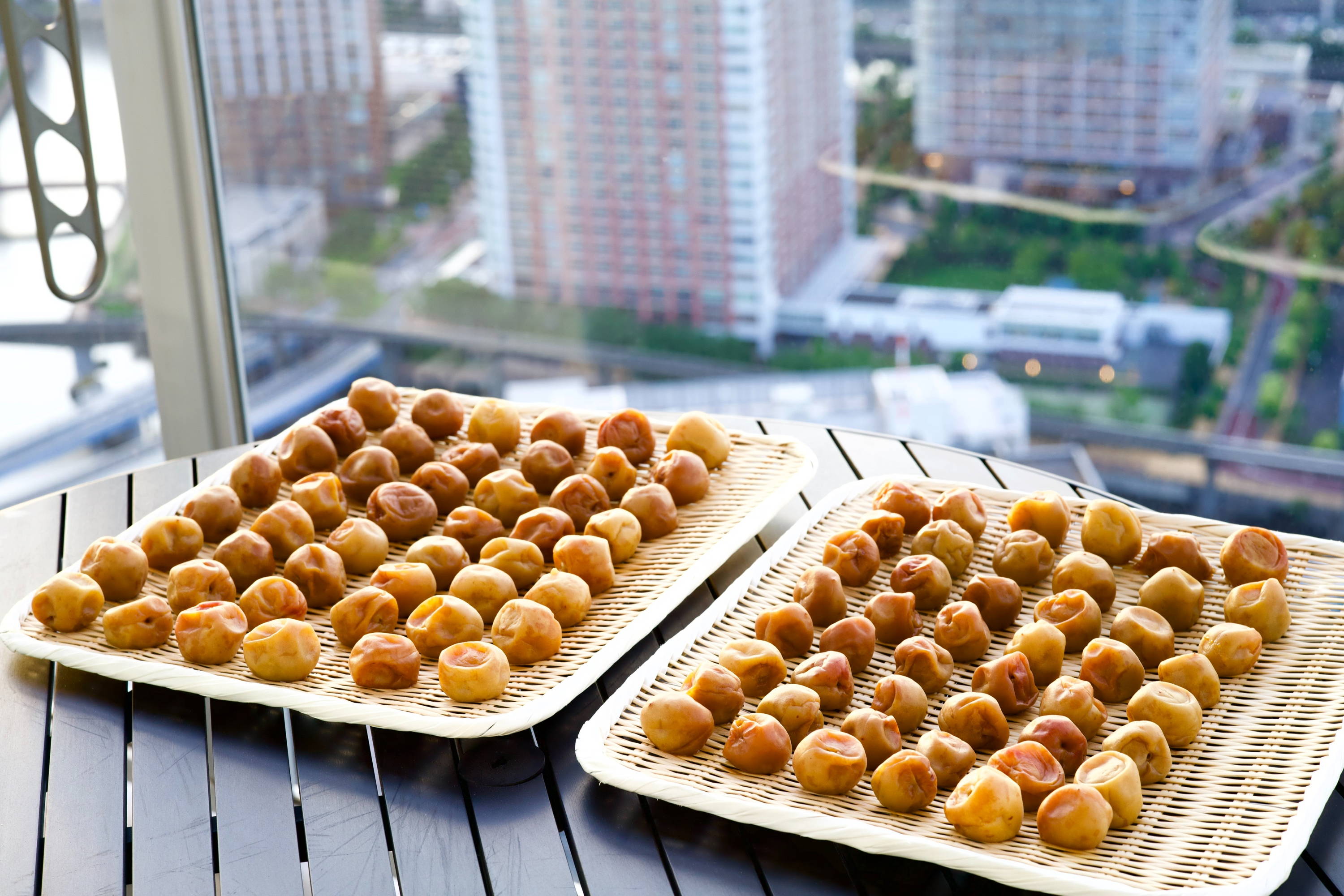 The umeboshi, a type of Japanese pickled plum, is an ancient food that has been consumed for centuries. The fruit is sour and salty with a tinge of sweetness. It's the perfect addition to rice balls or sushi rolls as well as being used in sauces and dishes like miso soup. Umeboshi also make great additions to salads or even ice cream!

If you're looking for ways to spice up your cooking routine, this article on the power of umeboshi will give you some ideas!

Watch this video on how to make Onigiri with Umeboshi

Umeboshi are pickled ume fruits. They have a sour, salty flavor (some would say an acquired taste) and can be used as a marinade for meats or eaten on their own with rice balls (onigiri). In Japan, they're often given to new mothers so that the salt will help reduce morning sickness.

The process of making umeboshi is actually quite simple: take your fruit; remove its pit from inside; fill it up with salt water until the liquid covers all sides of the fruit; add some type of flavoring such as vinegar (for umeboshi vinegar) or red pepper flakes to give it more taste if you want something different than just plain-old salted umes ; let them sit in a jar at room temperature for about a week or two before eating.

Popular in Japanese cuisine, umeboshi are used extensively throughout Japan both in Japanese cooking and on their own. They can be eaten whole, but they're usually cut into thirds so that people can use one piece per meal (since they have an extremely sour taste).

If you buy a single umeboshi from the store, it will likely come pre-cut for easy consumption. The salt content varies by brand--some brands may also include red pepper or vinegar to provide more flavor--so read the label carefully before purchasing if you want something different from plain old salted umes . Umeboshi is typically sold packaged together with rice balls as well, which makes a great grab-and-go snack! But beware: umeboshi are extremely sour, so you'll want to provide some type of sweet or savory accompaniment.

Umeboshi are a great food to have on hand at any time of the day. They can be eaten for breakfast, lunch, dinner or as an after-dinner dessert!

Umeboshi is typically sold in plastic containers that keep it moist and fresh--some versions even come with its own little bamboo spoon so you don't need to worry about dirtying another utensil while eating out of your package. If not pre-cut, umeboshi should always be cut before consumption since they're extremely sour and some people might find them difficult to eat whole. And if you want something extra salty but still sweet like traditional Japanese rice cakes called dango (or just want an excuse to make more dumplings), try making some with umeboshi!

The power of salt-preserved sweet plums is not something to be taken lightly--after all, many Japanese people keep them on hand year round and include the fruit in a variety of dishes as well as eating it by itself. It makes sense that with their high level of citric acid (and sometimes spiciness), these little fruits have been used not only as a taste enhancer but also for their medicinal benefits.

Here are some more ways you can use umeboshi: sprinkle onto rice or noodles; add to soup broth before cooking; grate and mix into yogurt for breakfast like they do in Japan; make an umeboshi-infused salad dressing; or make an umeboshi puree to add saltiness and acidity to any dish.

Why people eat it?

Common in Japanese culture, traditional Japanese households often use traditional umeboshi as a light side dish, or during winter to prevent colds (or, for some, as a hangover cure). Ume is also used for ritual ceremonies such as weddings and funerals because of its symbolic meaning in Buddhism.

Additionally, umeboshi is used as an ingredient in sushi and pickled vegetables. The taste of the salt-preserved fruits enhances the flavors of other foods it's mixed with.

The salty flavor also brings out sweetness from dishes such as yakisoba (a fried noodle dish) or goma dofu (sesame tofu), making them more appetizing to eat. If you don't have soy sauce on hand, try sprinkling a few pieces over your rice for that extra bit of flavour!

Umeboshi are great because they're easy to make at home if you can find fresh apricots or quinces in season; however, ume plums may be substituted year round in most stores.

It's best to eat umeboshi within a day or two of making them, as they start going soft after that time period and the flavor starts to fade.

Side note: Ume means "plum" in Japanese (as opposed to its other meanings). This vegetable is also called an "apricot." There are many different varieties of this fruit and most can be used for cooking purposes. The type commonly found in stores here is from China so it may not have been grown with pesticides like the ones we import from Japan.*

Umeboshi tastes sour because of lactic acid bacteria which break down the sugar into acids during fermentation. Lactobacillus plantarum is the dominant bacteria found in most umeboshi products.

It's important to note that these are the same type of "good bacteria" which, when consumed regularly, can help prevent illness and improve digestion!

How to make your own

You can either eat right away as is or enjoy by adding soy sauce over top which adds extra flavor and makes the experience even better! And now you know how easy it is to make Umebosh!

Some dishes that feature umeboshi include:

Aonori rice balls are a sushi dish that features umeboshi.

Aonori rice balls can be served in place of nigiri sushi as finger food, like hors d'oeuvres when there is no need for utensils but it's important not to leave guests hungry while waiting on other dishes. They also make great snacks: simply pop them into your mouth without any fuss! With its natural umami flavor complemented by the earthy sesame taste, they're perfect just by themselves—no dipping sauce required. For those who don't care about gluten, they make a great substitute for bread crumbs when pan-frying fish or meat.

Ochazuke tea made from toasted rice

Ochazuke tea is a Japanese dish that typically features umeboshi.

The use of cooked rice creates a savory porridge that's full of umami flavor, making this dish popular among those who don't do well on plain boiled greens but still want their vegetables! It also provides some protein while being gluten free, which makes it suitable even for people with food restrictions—though of course the same could be said for umeboshi.

Rice cooked with umeboshi paste or sea salt is a dish that features umeboshi.

The use of raw ingredients in this dish creates an umami flavor not masked by seasoning; it's perfect for those who don't want too much strong sauce but still enjoy their food seasoned well! The use of more water than normal also helps keep down any "ricey" taste often associated with brown rice. It can serve as a side dish alongside dishes like katsu curry, garlic fried chicken breast strips, tomato baked salmon--whatever you're craving!

Rice cooked with ume paste or salt is not only delicious but also versatile in that it can be served any time of day. It's the perfect substitute for a plain bowl of white rice and makes an excellent accompaniment to other dishes, too--no matter what your tastes may be!

Umeboshi tastes sour, salty and sweet. It's also crunchy because of the salt crystals in it!

The ume fruit is a small Japanese plum that typically grows wild throughout northern Japan (but also in Wakayama Prefecture). The pickled plums are traditionally made from this type of fruit with lots of rice malt added to give them their characteristic taste and texture. They have been eaten for centuries as part of everyday life in Japan, often served on top of rice balls or chopped up into sushi rolls - either can be delicious if you love sour flavors!

Are umeboshi plums good for you?

Umeboshi have many health benefits as they are rich in vitamin C and have a high concentration of antioxidants. They also contain lots of salt, which is good for you because it helps regulate the body's natural balance (too much can cause problems so eat sparingly), and potassium!

Can you eat umeboshi?

Yes! Umeboshi are traditionally eaten with rice and also used in sushi dishes. The salty taste is a great way to prevent overeating, too - it can help you feel full without consuming large amounts of calories.

Yes! As above, umeboshi tastes sour, salty and sweet. It's also crunchy because of the salt crystals in it!

Hope you enjoyed this article about umeboshi!

Looking for more on Umeboshi and other similar content? Try these:

How to Make Homemade Vegan Pizza