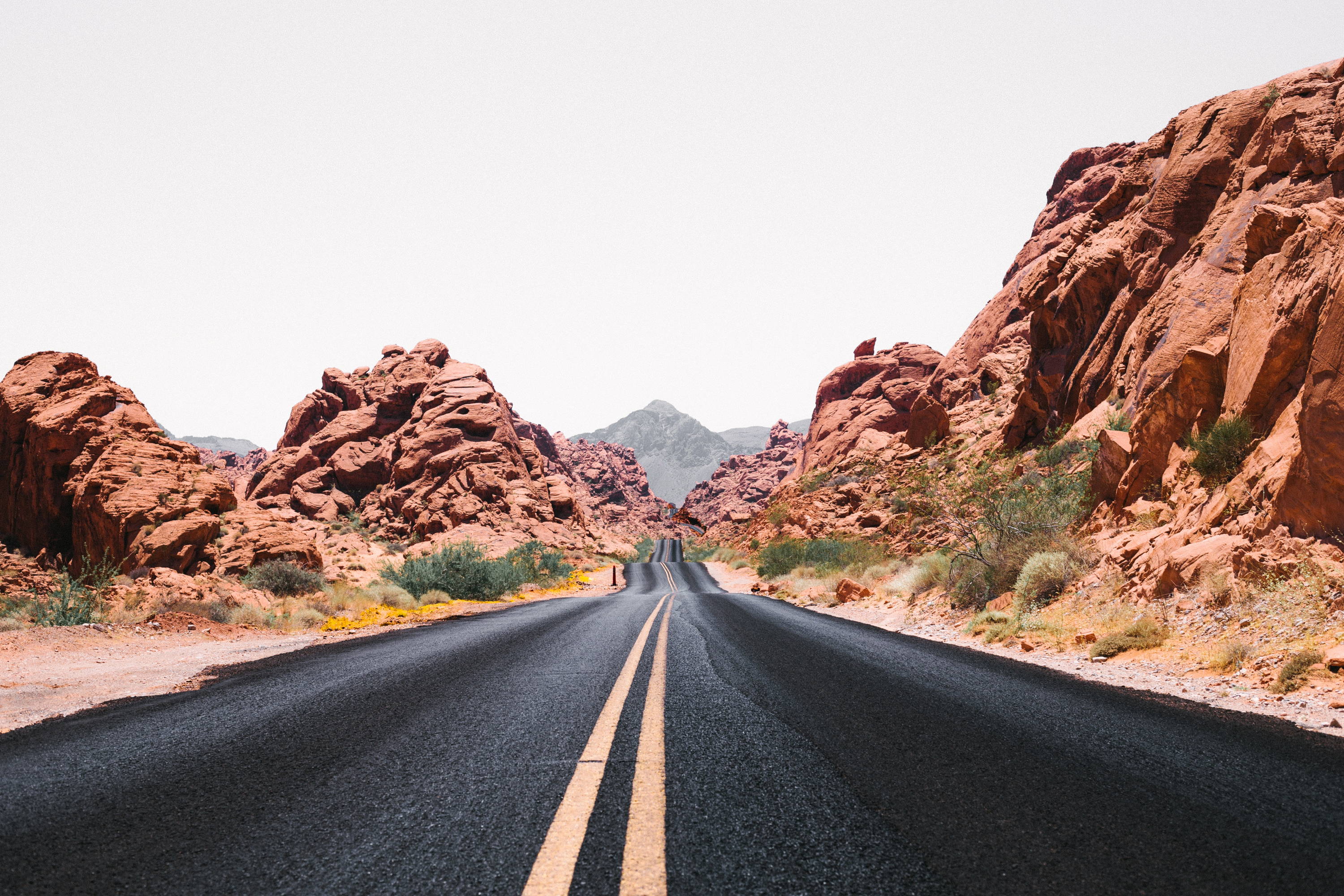 Valley of Fire State Park is not one of the great national parks in Nevada. It’s not even one of the great national parks near Las Vegas. In fact, it's only a state park. But it’s one of the great Nevada state parks and perhaps one of the best state parks in the country. While there are many excellent day trips from Las Vegas, Valley of Fire, Nevada’s first state park, should be a destination near the top of anyone’s list. If you're looking for hiking or camping near Las Vegas, the park has many of those opportunities available and is only 50 miles northeast of Las Vegas (or, about an hour drive on I-15). Valley of Fire weather can be a bit extreme during the summer months, with temperatures reaching well north of 100oF. However, if you plan a trip during the cooler winter months, there are many excellent things to do and places to see.

Why you should go. 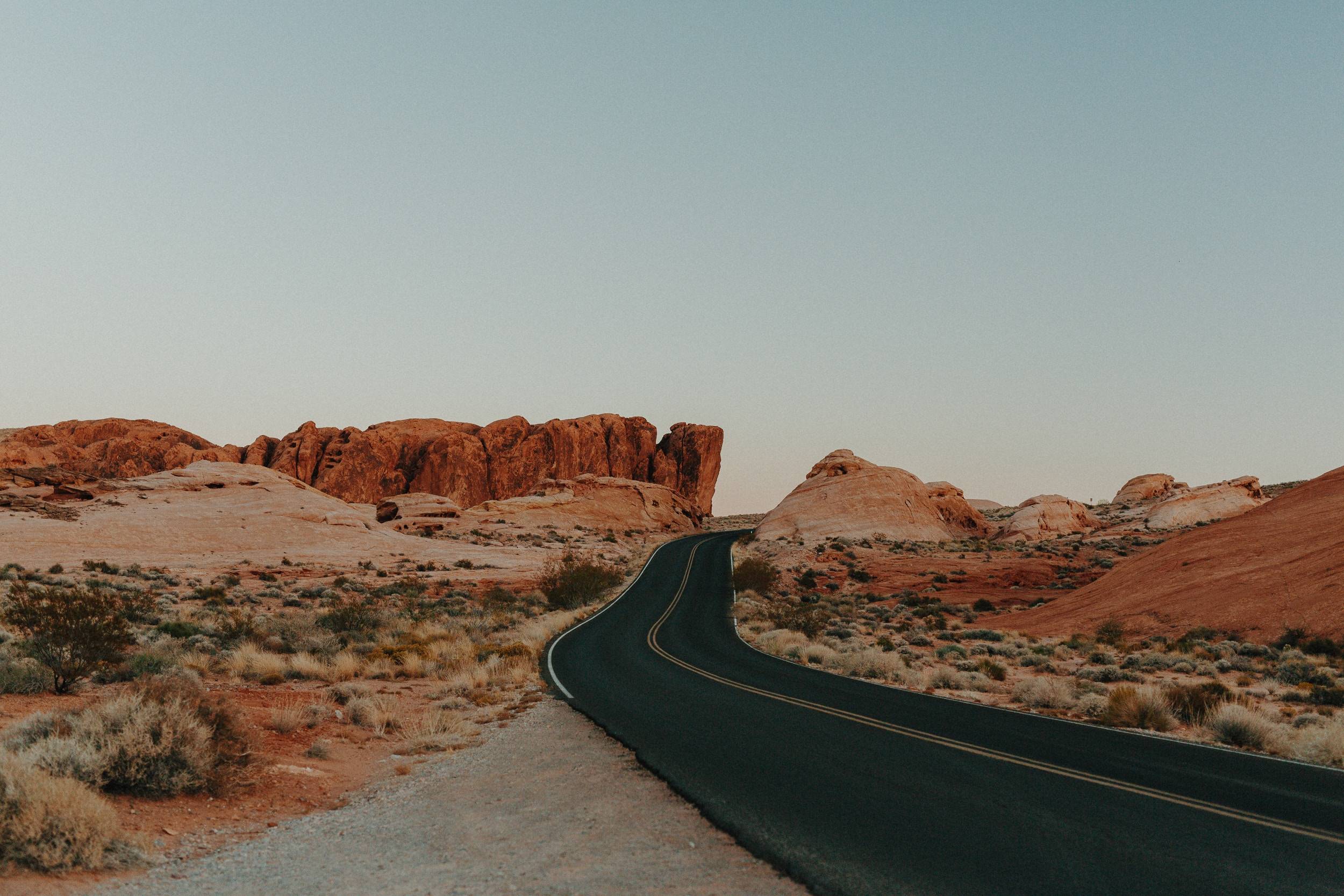 Valley of Fire State Park is a 46,000-acre recreation area located in the Mojave Desert just north of Las Vegas and right next to the Moapa River Indian Reservation. It contains red rock formations that give the look-and-feel one would expect to see on Mars and is home to several hiking trails and wildlife, including bighorn sheep. The Anasazi inhabited the region for a couple thousand years and left a number of petroglyphs for you to see. This is also the location where Captain Kirk died in Star Trek: Generations for all the Star Trek fans out there. The park is roughly a 5-hour drive from Los Angeles, California, a 5.5-hour drive from Phoenix, Arizona, and a 6-hour drive from Salt Lake City, Utah. 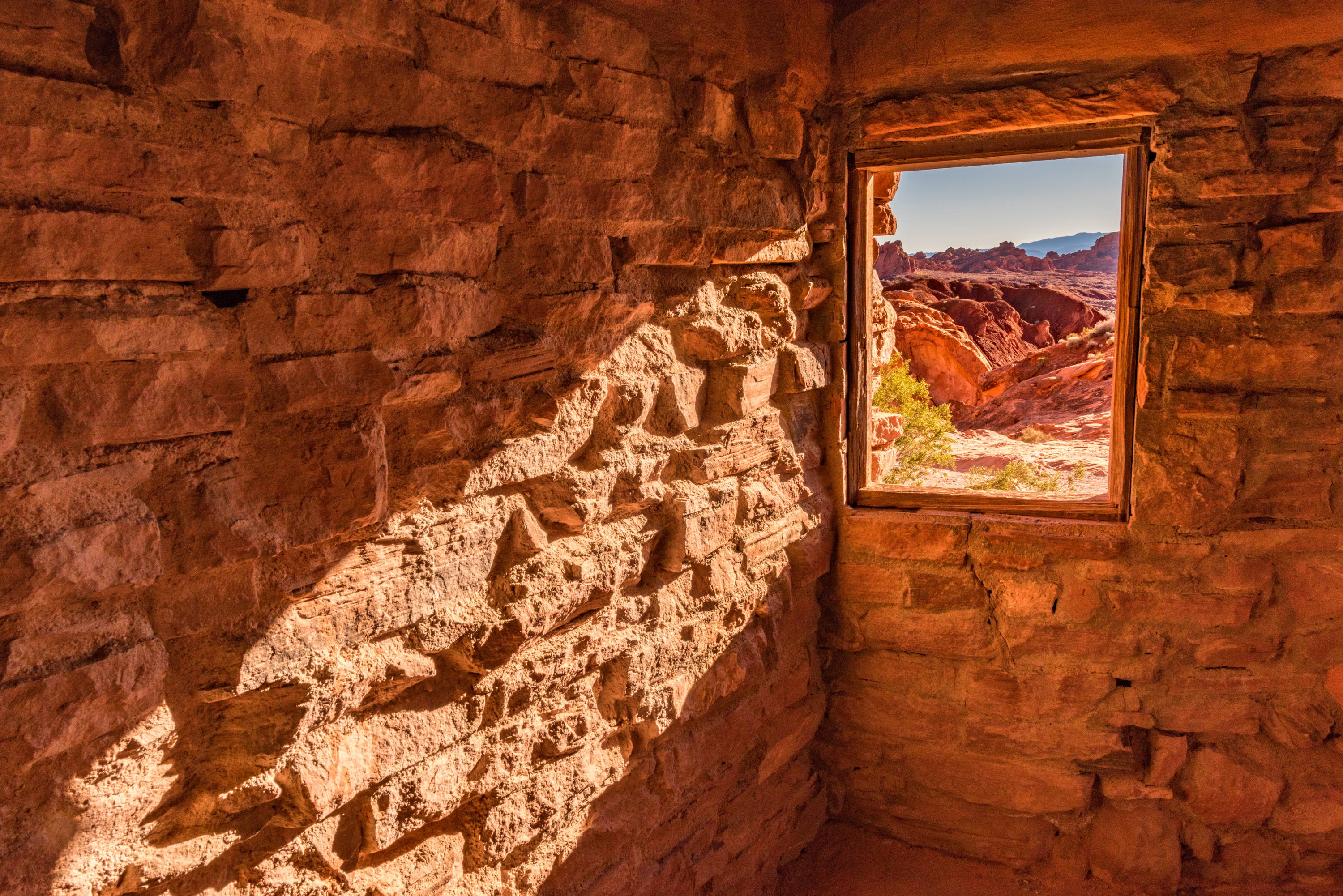 There are a number of things to do in Valley of Fire State Park and while its not as large and expanse as some of the national parks, it has quite a bit to offer for just a state park.

Valley of Fire camping is a popular activity in the park and there are two campgrounds, Atlatl Rock and Arch Rock (both highly recommended), with a total of 72 sites. Tables, grills, water, restrooms, and showers are available for the campsites and reservations are on a first-come, first-served basis with stays limited to no more than 14 days in a 30-day period. When visiting during popular times, e.g. fall and spring, campgrounds generally fill up early, so it's recommended to arrive before 8 or 9am to ensure a site. Campsites are $20 per night with an additional $10 charge for sites with a utility hookup.

Hiking is another popular activity in the park and there are a number of trails available (check out the Valley of Fire Map for a quick reference):

This 1.1-mile loop trail is the most popular in the park and is located at the very end of White Domes / Mouse's Tank Road. It features a short slot canyon and an old move set for "The Professionals", a 1965 film starring Burt Lancaster, Lee Marvin, and Caludia Cardinale.

If you have time for only one hike, this is the hike to take. Located on Mouse's Tank / White Domes Road past Pastel (Pink) Canyon but before the White Domes Trail, this 1.5-mile hike features excellent scenery and is the favorite hike of many. It's better to do this one early in the morning to avoid the crowds and the heat. It's fully-exposed to sunlight, so be prepared for a warm hike. The first section is all sand so it's a bit of a difficult walk. Bring water.

This is the most accessible way to see Petroglyph Canyon and is an easy 0.8-mile out and back trail just off of Mouse's Tank / White Domes Road.

This short 1.2-mile loop is right off of Valley of Fire Highway as you're exiting the park and offers views of Elephant Rock.

A 1.1-mile out-and-back trail just past Mouse's Tank Trail on Mouse's Tank / White Domes Road. This trail features excellent views of sandstone rock formations covering the entire color spectrum and is an easy way to get to Fire Canyon Overlook.

A longer point-to-point trail at 8.8 miles if you want to get out and stretch your legs. The trail runs from Valley of Fire Highway all the way to White Domes Loop.

Driving Through the Valley of Fire

Driving through Valley of Fire State Park is simple enough as the main road, Valley of Fire Road, cuts right through the park from the west entrance to the east entrance. Mouse's Tank / White Domes Road juts north from the main road about halfway through and ends at White Domes Trail. There are parking lots at all the major sites and a Visitors Center just off of the beginning of Mouse's Tank / White Domes Road. Entrance fee is $10 per vehicle. Dogs are welcome but must be kept on a leash when outside the vehicle. 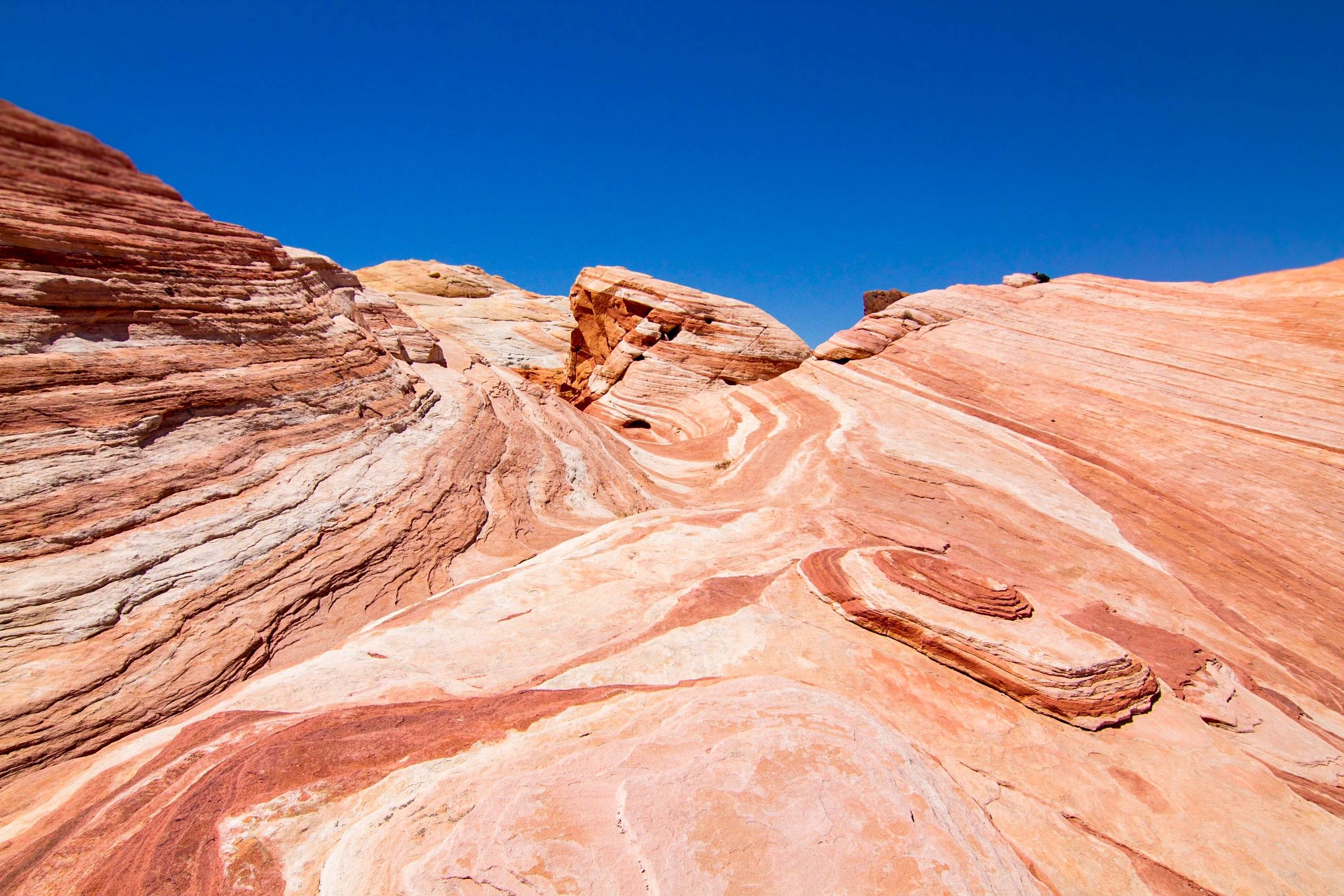 The White Domes are easily seen from White Domes Trail at the end of Mouse's Tank Road. The trail is only 1.1 miles and is perhaps the most popular in the park. The White Domes are a series of rock formations that look like, well, white domes, and is a top attraction if you're visiting the park.

Named after Little Mouse, a fugitive Paiute who evaded the law for some time in the late 19th century by hiding in the area, Mouse's Tank is located just after the Visitor Center on Mouse's Tank / White Domes Road. The short 0.8-mile trail to the site is an easy hike and is the most accessible way to see Petroglyph Canyon.

A large red rock formation near Atlatl Rock Campground just off the Valley of Fire Highway near the west entrance, Atlatl Rock is accessible via a metal stairway that leads near the top and offers a great chance to see petroglyphs.

Elephant Rock is located off the Valley of Fire Road near the west entrance and is accessible via a short 1.2-mile loop hike. The rock looks like, you guessed it, an elephant and is one of the top attractions in park.

Seven Sisters is a series of seven sandstone rock formations off of Valley of Fire Highway just past the turn for Mouse's Tank / White Domes Road.

A rock formation in the form of an arch near Arch Rock Campground, Arch Rock is just a short detour from the main road and can be seen by car. While not as large as some of the arches you could see at Arches National Park in Utah, the quick accessibility and adjacency to the campgrounds make this site a must-see.

The Lost City Museum, formerly known as the Boulder Dam Park Museum, is located in Overton and is one of seven operated by the Nevada Department of Tourism and Cultural Affairs. This museum was built in the 1930s by the CCC conservation corps and features a reconstructed Pueblan house site that is open to visitors. 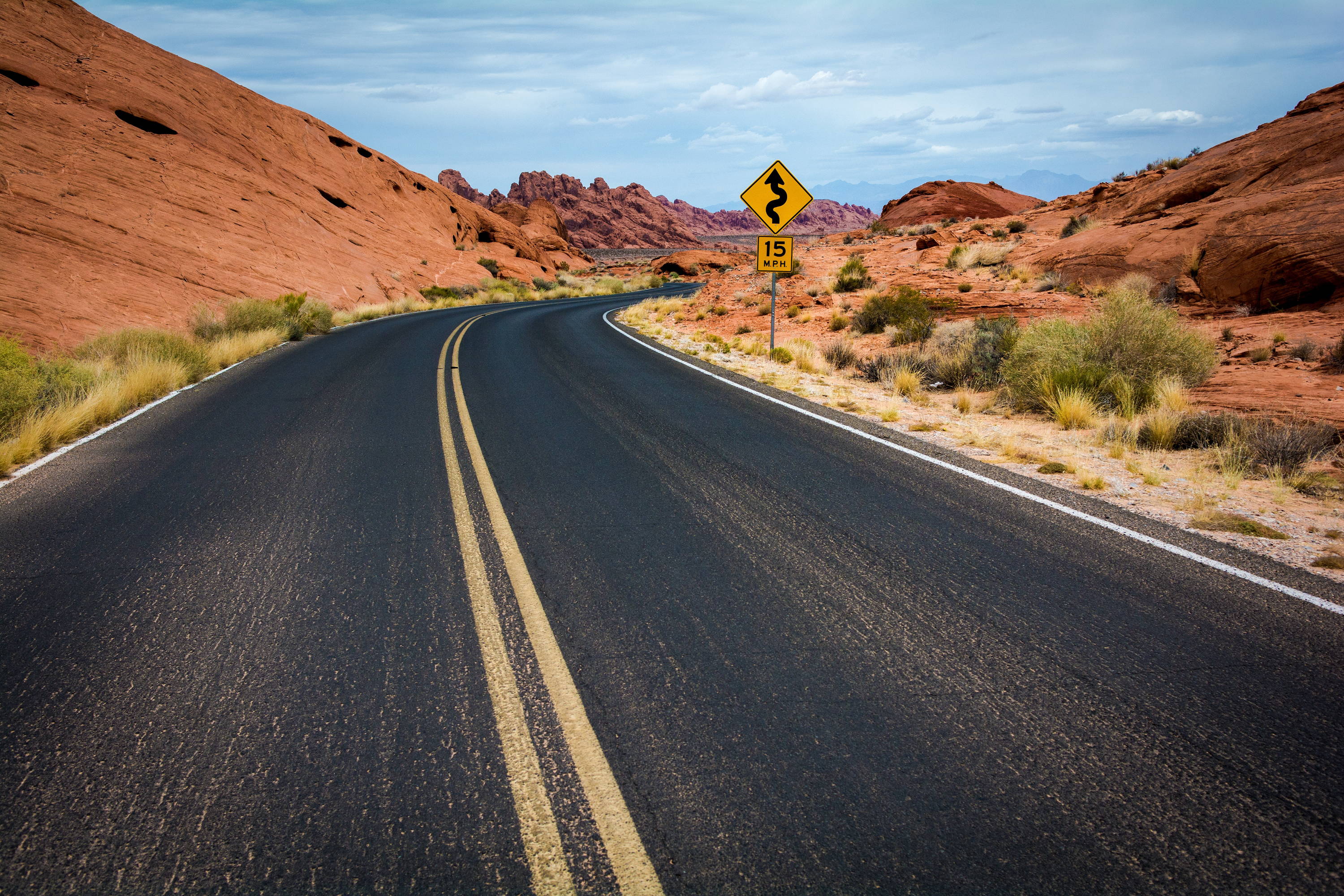 The best time of year to go to Valley of Fire State Park is October through April when temperatures are cool. In summer months, average temperatures can range to over 100oF so even easy hikes over loose sand can seem difficult in this fully-exposed terrain. Better to visit in October through April when temperatures range from a high of 83oF in October to a relatively-low high of 57oF in January. Make sure to arrive early, however, particularly if you're hoping to secure a campsite, as the park is very popular during this time. 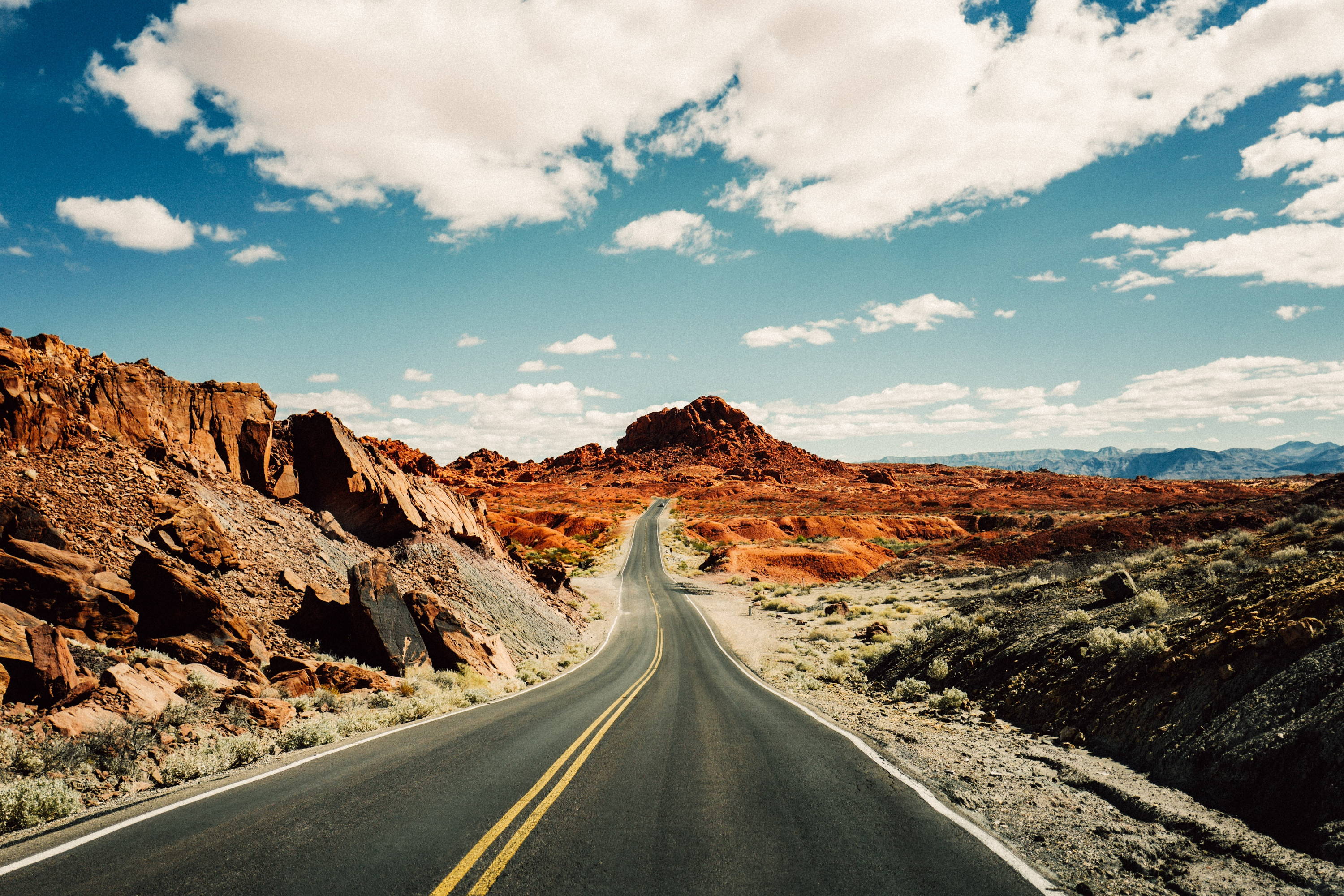 How much does it cost to get into the park?

The entrance fee is $10 per vehicle and the park is open 7 days a week, 365 days a year from sunrise to sunset.

What can you do at the Valley of Fire?

There are a number of outdoor activities including hiking, camping, and wildlife sightseeing (e.g. bighorn sheep). There are red sandstone formations, petrified trees, and petroglyphs (ancient rock drawings) dating back over 2,000 years. The Visitor Center includes exhibits on geology and the history of the park. There's also an annual Atlatl Competition if you happen to be around when it's going on.

Can you drive through the Valley of Fire?

You can - the Valley of Fire Highway cuts right through the park and connects to the two main campgrounds. There's also a road, Mouse's Tank / White Domes Road, that runs north-south and connects to the Visitor Center as well as many of the key sights in the park.

Why is it called the Valley of Fire?

The park gets its name from the red Aztec sandstone formations that formed from shifting sand dunes over 150 million years ago according to scientists, i.e. the rocks look like fire rising from the valley.

What town is the park in?

The park sits about 50 miles northeast of Las Vegas off of I-15 and around 15 miles south of Overton, Nevada, the closest town.

How far away is Valley of Fire from Las Vegas?

The park is roughly 50 miles northeast of Las Vegas or 1-hour drive by car.

Does Valley of Fire allow dogs?

Dogs are allowed in Valley of Fire State Park but must be on a leash when outside of the vehicle.

How old is Valley of Fire?

Over 150 million years old according to scientists.

How do you get to the Fire Wave?

You get to Fire Wave in Valley of Fire by Fire Wave Trail, which is near the end of Mouse's Tank / White Domes Road, after Pastel (Pink) Canyon Trail but before the White Domes Trail. Park in Parking Lot #3 on the left; the trail will be across the road to the right. Fire Wave trail is 1.5 miles round trip and includes about 200 ft of elevation change.

How old are the petroglyphs? 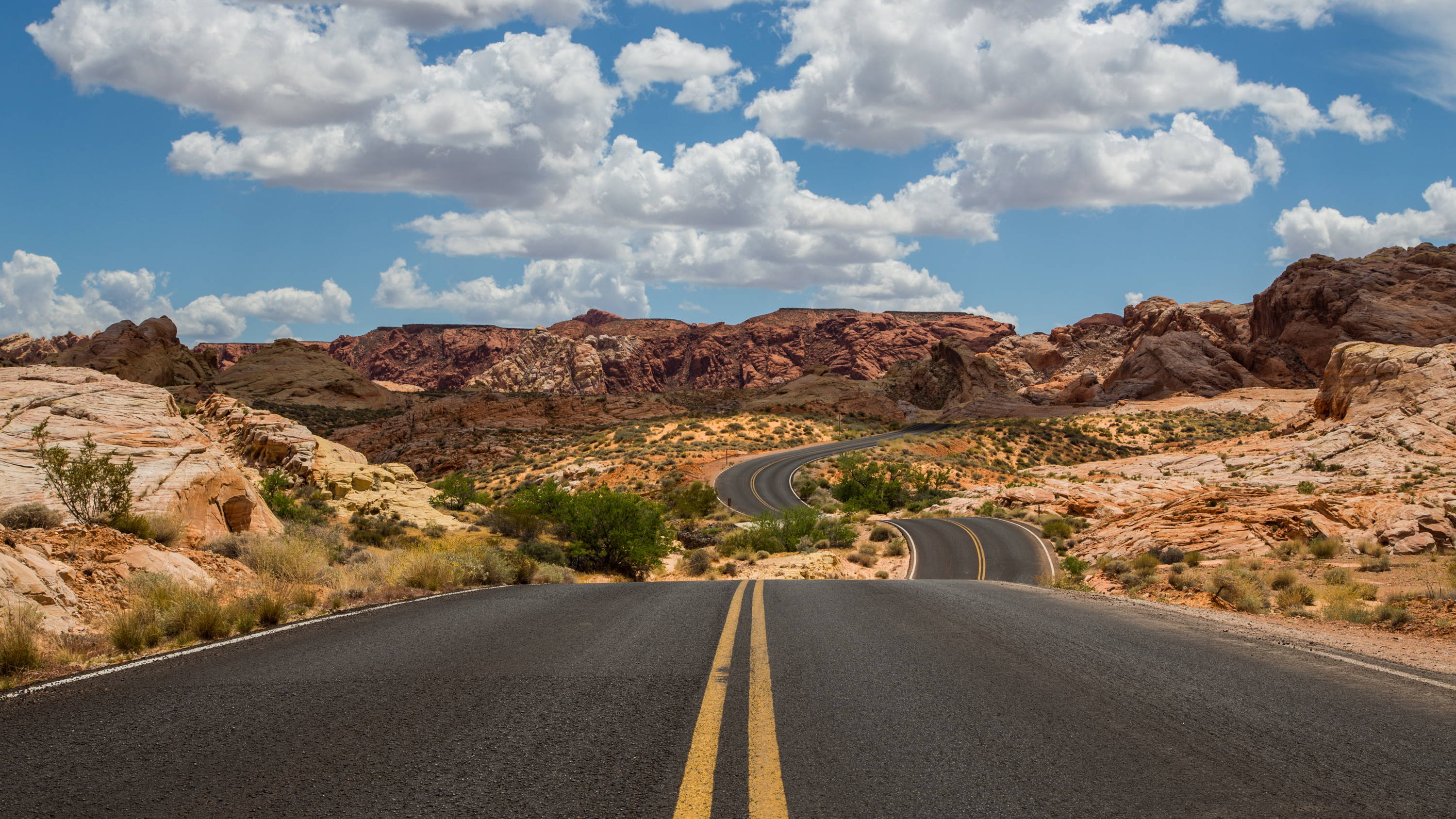 While Red Rock Canyon National Conservation Area, Grand Canyon National Park, and Lake Mead National Recreation Area are places that should be on anyone's list and are a must-see if in Las Vegas, Valley of Fire State Park receives relatively less attention and is therefore something of a hidden gem in the Mojave Desert (although locals are quite aware of its existence and take full advantage). If you're looking to go to this incredible park, plan to visit between October and April when temperatures are at their coolest, pack plenty of essentials and make sure you have a full tank of gas before you leave as amenities are limited, and arrive early in the morning (before 8 or 9am) if you're hoping to secure a campsite. We hope you enjoy this amazing park! It's an incredible treasure and a stop that should be on anyone's bucket list.

Looking for more on Valley of Fire State Park and other outdoor adventures? Try these:

Hiking Boots: Why You Don’t Need Them and What to Buy Instead